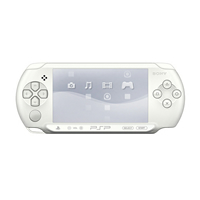 As you make know, the PSP-E1000 model is a slimmed down version of the original PSP, offered at a lower prices that the regular feature-rich model. The new model will be accompanied with a great range of PSP Essential titles that will be available for £9.99/€9.99 (RRP) each.

Titles now available that are perfectly suited to the brand new Ice White PSP include InviZimals, and Invizimals: Shadow Zone, the first and second instalment in the successful InviZimals series uses AR to enable you to literally hunt down, capture, battle, customise and trade the magical monsters living in the world all around you.