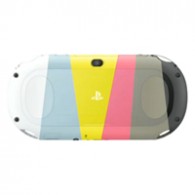 In a press-only event this morning, Sony has revealed that the new PS Vita “Slim” PCH-2000 model will available in the UK on February 7th 2014, with pre-orders starting today. The new PS Vita model was released in Japan last year, and had sold well due to its lower price.

The system will have a recommended retail price of £180, but may be sold with some discount. The new model has a better battery life, 1GB of built in storage, and a LCD display instead of the OLED screen in the original model. The new PS Vita model is 20% thinner and 15% lighter than the original PS Vita.