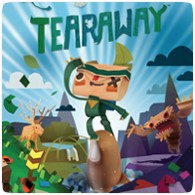 With just over 3 weeks to go until release, Media Molecule has announced that Tearaway on the PS Vita has gone gold in all regions. This means that the game is ready for manufacturing and then off to stores ready for sale. The game is available for pre-order at retailers and on the PlayStation Store for just £19.99.

There are also two pre-order packs available – one with DLC content for LittleBigPlanet and LBP Karting, and the other with PSN avatars and the game’s official soundtrack.

it’s official! Tearaway is now totes 100% gold in all regions of the world. 3 weeks until release! 🙂