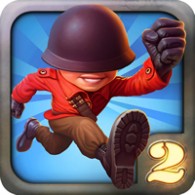 Tower defence game, Fieldrunners 2, is coming to the PS Vita this summer, Subatomic Studios have announced. The sequel to the original Fieldrunners on the PSP runs on a new game engine, which allows each and every enemy to carve their own unique path through the battlefield.

The developers have added some bizarre weaponry imaginable to the game, including towers that launch infectious syringes, guns that turn enemies into cows, flame throwing Jack O’Lanterns and more. Fieldrunners 2 for PS Vita is now in the final stages of development, and will be available on the PS Vita this summer.

A final launch date for the game, along with more information on the game, will be revealed in coming weeks.