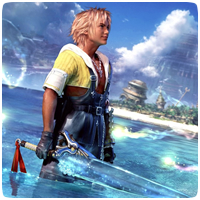 Final Fantasy fans will be happy to know that Final Fantasy X HD is still coming to the PS Vita. The game was announced back at TGS 2011 but has been in hiding until earlier today. At this morning’s PS Vita Showcase in Japan, Sony confirmed that the game is on the way, and new screens have been released from All Games Beta, presumably captured from the live stream.

The screens show the game running on the PS Vita, but the screens are a bit blurry, suggesting the images weren’t captured directly from the device.