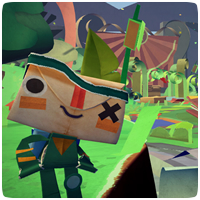 Media Molecule has announced its new IP called Tearaway, which will be released exclusively on the PS Vita. Tearaway follows a paper character called Iota, a messenger who needs the player’s help to navigate the world. Iota and the world of Tearaway is made of paper and it can be taken advantage and manipulated by the player.

The game uses the PS Vita’s hardware like the touch screen, rear touch pad, camera and microphone to manipulate the environment in the game and help Iota along his way.