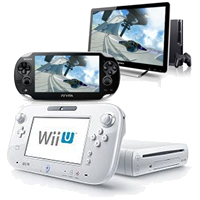 Sony doesn’t really have much to worry about when the Wii U hits the market. The Wii U, which is an updated Wii console (new hardware specs and design) and a tablet style controller dubbed the Wii U GamePad, works similarly to the cross-platform features of the PS3 and PS Vita. But, will it mean Sony finally enables remote play across all PS3 titles? And, will the Wii U succeed?

If Sony plays its cards right, it could replicate all the features of the Wii U using it’s two existing consoles, although, the Wii U will be much cheaper to purchase than two separate consoles, even if the Wii U’s official price has yet to be revealed. Nintendo is promoting the Wii U based on what the console can do, while Sony has already put may of these features in action – some of which have been in action since the PS Vita launched back in March of this year.

PS Vita vs. Wii U GamePad

The Wii U GamePad  has a camera, gyroscope and motion sensors, dual analogue sticks, microphone and touch screen. All of these features are also available on the PS Vita. There are some differences between the two too. The GamePad also has NFC to read RFID cards, but the PS Vita has a multi-touch front screen and rear pad – the GamePad isn’t multi-touch to reduce the cost of producing the controller.

The Wii U GamePad also lacks any sort of wireless Internet connectivity, such as Wi-fi or 3G. This means that even if the GamePad could be taken on the go, it wouldn’t be very useful without Internet access.

So far, the PS Vita fairs stronger of the two, since the GamePad is lacking in some areas. The cost of the GamePad hasn’t been revealed yet, but we all know the PS Vita costs £209 for the Wi-fi-only version. Quite a hefty price to pay, but it does function as a stand-along console, while the GamePad will presumably always be tied to the main console.

Remote Play / Cloud Save vs. Wii U

One of the features the Wii U’s unique selling point (USP) is the ability to play a game on the TV and then switch the display to the GamePad and continue playing on there. This feature is available on the PS Vita in two different ways.

Cross-Save is something that a select number of PS3 and PS Vita games support. By managing game data from PS Vita and PS3 in the cloud, the Cross-Save feature enables users to continue playing their game on the go on PS Vita, right from where they left off on their PS3 at home. Games like MotorStorm RC already supports Cross-Save, while upcoming games like Sly Cooper: Thieves in Time and PlayStation All-Stars Battle Royale will also support cross saving.

If Sony enables Remote Play across the entire PS3 catalogue, this becomes a big selling point for the PS Vita. The ability to remote-play any game on the PS Vita was first leaked back in September 2011 after the Tokyo Game Show, showing Killzone 3 running on the Vita, however, the game doesn’t actually run on the retail version of the console. It appears as if the feature could be enabled in a future firmware update if Sony chooses to do so.

PS Vita and the PS4

The PlayStation 4 will also support the PS Vita and presumably allow more features for cross-play, and remote play. Obviously, we are just speculating, but Sony wouldn’t leave the PS Vita out of its future console. Hopefully, Sony has some interesting new features that will make use of the PS Vita.

Whether the Wii U sells well or not remains to be seen, but if the original console is anything to go by then you can expect it to sell out for months on end. However, Sony does have a small advantage in that the technology used in the Wii U is already powering some of the PS Vita and PS3 features we talked about above. If the Wii U succeeds, Sony can simply release new firmware updates for the PS3 and PS Vita to enable console-wide remote play with the entire PS3 catalogue of games.

If the Wii U is priced reasonably, it’s likely that no one will fork out to get a PS3 (or PS4) and PS Vita to get similar features. However, the Wii U and the PS3 / PS Vita both have several advantages and disadvantages that make it enticing to games, as well as put them off. Pricing is one of the biggest barrers to entry and this is where the Wii U will most likely win.

That’s not to say that the Wii U or the PS3 / PS Vita will fail. Both Nintendo and Sony have their loyal fan bases, and it only takes a few unique features to attract new customers. Hopefully, the release of the Wii U will mean Sony improves on the PS Vita, and finally gets the console selling more.