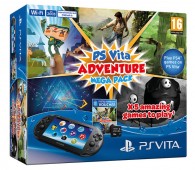 Sony has announced a new PS Vita Meta Pack bundle for the PS Vita, this time focusing on Adventure games. The Adventure Mega Pack contains five top games, including Uncharted: Golden Abyss, Tearaway and Gravity Rush. As with previous Mega Packs, this one comes with a 8 GB memory card and a PSN voucher to download all five games. A complete bundle is also available, which includes all the games, a memory card and a PS Vita console.

The Adventure Mega Pack with PS Vita will cost €199.99RRP – that’s the same price as standalone system, and includes the 5 great games above. The stand-alone game and memory card bundle will cost €39.99 RRP.