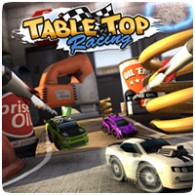 If you loved games like Micro Machines, you’ll be happy to know that the PS Vita is getting it’s own micro racing title next month. Liverpool-based indie development studio Playrise Digital have joined forces with publisher Ripstone to bring their award-winning game Table Top Racing to PS Vita in August.

The game will be available in North America on August 5th 2014, followed by Europe on the following day. Table Top Racing features a host of crazy tracks complete with shortcuts, over-sized obstacles, jumps and all manner of other hazards. The game includes elements from similar racing games like ModNation Racers and LittleBigPlanet Karting, including one shot weapons power-ups which give players a temporary advantage.

The game has been available on mobile devices for a while now, but the PS Vita version promises some improvements, including controllable accelerator and brake, and “Rear View” glance-back by touching the rear panel. The graphics have also been improved, with the race tracks now using twice as many polygons.

The game includes a four-player multiplayer feature, supporting racing via both ad-hoc and the PlayStation Network.