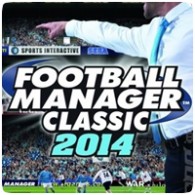 It’s great to finally be able to release FMC Vita. This game has been the most technically challenging that we’ve ever worked on – we’ve essentially fit a PC game that needs loads of memory, a mouse and a keyboard into Sony’s wonderful handheld with a touch screen – and the help we’ve had from all of our partners has been wonderful. To be able to take your home computer save onto the road adds a huge amount to the Football Manager experience.”

As the current season is coming to an end shortly after the game is released, it’s unclear if an update for the game will be released to update the squads to match the new season.