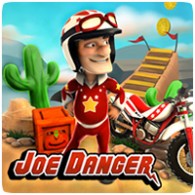 Joe Danger and Joe Danger 2: The Movie are heading to PlayStation Vita next year, Hello Games have revealed.  Yorkshire based studio Four Door Lemon will be porting the games to the PS Vita, in conjunction with Hello Games, who have teased “a few fresh surprises” for the Vita versions.

The games will be releasing on the portable in Q2 of 2014. Not a lot of details about the games have been revealed yet, but you can expect PS Vita specific features to be added and revealed in coming months.

Joe Danger 2: The Movie was offered on the PS3 as part of the Instant Games Collection in 2013.