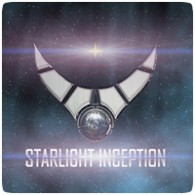 Starlight Inception, a first-person / third-person space combat experience, is coming to PS Vita in December. The game features a single-player campaign and several multiplayer options. In Starlight Inception, you’re a young space fighter pilot assigned to the U.S.F. Midway (SCVN-41) one hundred years from tomorrow. In the first mission you’ll learn about your ship, the controls, and face your first enemies.

The game will have more than 30 hours of single-player gameplay, and you’ll be able to explore your mothership between missions: see your bunk area, report to the captain on the bridge, and visit the Pilot Ready Room where you receive your mission briefings.

The game will also have a hangar bay with more than thirty different fighters, bombers, and transports, each with customizable weapons and equipment to choose from for the missions. The fighters are future versions of modern day fighters like the Lightning, Raptor, and others, and they’re made to work in both space and planetary environments.

There are ten single-player missions, each with unique tasks and objectives, and also second campaign in the form of a 3D tower defense game, called Fly Patrol. As for the multiplayer mode, you can select from deathmatch, capture the ball, and football mode, each with unique challenges.