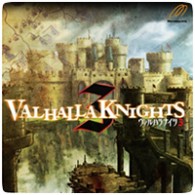 The North American release date for Valhalla Knights 3 has been announced for the PS Vita, with the game releasing in stores and on the PlayStation Network on October 15th. The action-RPG is set in a medieval prison called Carceron, a converted fortress surrounded by war-torn wildlands.

The main character’s name, gender, appearance, voice, race, and job class are all up to you, with job classes ranging from traditional Fighters, Mages, and Priests, to more distinctive classes such as Ninja, Samurai, and Amazon. As a veteran from the losing side of the Emperor’s war, you’ve been forced into servitude by a magical curse called the Mark of Death. Your task is to infiltrate the prison — disguised as a newly arrived prisoner, aka “fresh meat” — and find the treasure before the Emperor gets there himself.

To do that, you’ll need to get in good with the prison’s most powerful Families, by carrying out their dirty work in the form of quests and favors. Build a reputation, and ordinary prisoners will ask for your help, too — sometimes to find a lost heirloom or clear out monsters, other times to kill someone who might not even know why.

The game will be available to purchase on the PlayStation Store from October 15th for $39.99.