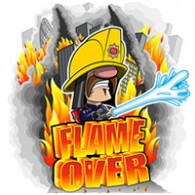 Laughing Jackle has announced that a new PS Vita game, Flame Over, is coming to the portable console in Q1 2014. Flame Over is a fast-paced, action-packed fire-fighting roguelike, featuring randomly generated levels and a complex fire simulation that radiates, jumps between objects, consumes fuel and destroys its environment in real time.

The player’s objective is simple: guide a fire-fighter through the 16 floors of Infernal Industries’ skyscraping HQ, exploring your environment, seeking out loot, secrets and power ups and hunting down blazes against the clock. All levels in Flame Over are fully destructible and feature different themes, many room types, secret items and hidden levels, environmental hazards and tons of lovely loot and power ups.

The player will take on the role of Blaze Carruthers, London’s foremost fire-fighting hero. Blaze will be discovering each level’s layout using his trusty hose, extinguisher and fire axe to track down blazes, hack through doors and walls and rescue imperilled workers and save cutesy cats.

With no two play-throughs ever the same, players can also save out their favourite randomly generated levels, set Challenges and share them with their friends and other players worldwide using Near. You’ll also be able to fuel the flame war using more traditional Cash Dash and Time Attack Leaderboards.