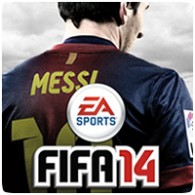 FIFA is the only soccer title available on the PS Vita currently, and since EA have a monopoly on this genre for the PS Vita, it seems they can get away with anything they like. Apparently, FIFA 14 on the Vita will be exactly the same game as FIFA 13 – no new features or functionality, only updated squads and kits to match the current season.

EA will basically be charging full price for a new game with nothing more than minor updates to its contents, instead of just releasing a DLC update for the existing title. The only advantage we can see from this is the extra trophies you can unlock in the game.