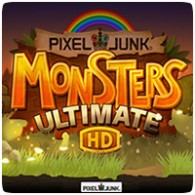 The official release date for PixelJunk Monsters: Ultimate HD has been finally been confirmed for the PS Vita. PixelJunk Monsters: Ultimate HD has been faithfully recreated for PlayStation Vita in high definition, with 30+ hours of gameplay, online and ad-hoc co-op play and everything you loved about all the previous editions. Even better, the game will be available on the PlayStation Store at the end of this month.

PixelJunk Monsters: Ultimate HD will be available on PlayStation Store and in retail stores on July 31st in Europe, priced at £9.99/€12.99. In North America, the game will be released a day earlier on July 30th 2013, priced at $14.99. Asia will also be getting the game at the same time, but a Japanese release date has yet to be announced.