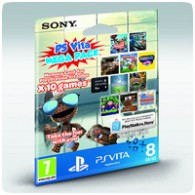 Sony has announced a PS Vita Mega Pack, featuring to great games bundled with a 8 GB memory card. The Mega Pack will be available from June 21st, 2013 for just €39.99. However, the catch is that the games won’t be pre-installed on the card. You’ll have to redeem the PSN voucher on the PlayStation Store and then download each game individually.

The following titles are included:

The Mega Pack will also be available in some territories as part of a new Wi-Fi PS Vita hardware bundle, priced at €249.99 (RRP). Release dates for this pack vary slightly across Europe: