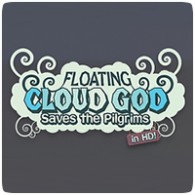 Originally released as a PSP Minis title, Floating Cloud God Saves the Pilgrims is coming to the PS Vita in high-definition and with new features. The game has been fully remastered for the PS Vita’s larger screen, and the game’s controls have been improved to take advantage of the dual analogues sticks too.

The original controls are intact, but skilled players can opt to use the dual stick configuration to separate the player’s movement from shot direction. The game also includes a full set of trophies to unlock, and little fixes and tweaks along the way.

Watch the trailer for the game below: