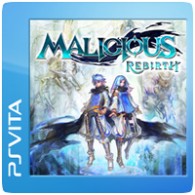 A hands-on demo of the game will be playable at E3 next week, so be sure to give it a go if you’re attending the Expo. The game will be coming to the PS Vita later this year, but you can expect more details on the game in coming weeks.