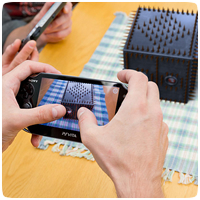 Augmented Reality title OPEN ME! first debuted at the Tokyo Game Show in 2012, and Sony has revealed that the title will coming to Europe later this year. The goal in OPEN ME! is simple – open the box and collect items inside. This may sound easy but boxes are full of traps and players will need to look at them from every angle to find the slightest hint.

The game uses the PS Vita’s camera, Augmented Reality and the touch screen to allow the player to rotate and open the box. Boxes range from a simple wooden design to more complicated and sophisticated structures made of metal and thinking outside the box is a requirement.

OPEN ME! will also feature multiplayer mode, where communication skills between players and speed are also key in opening these boxes. Multiplayer will require two PS Vitas loaded with OPEN ME!. Like single player, each challenge requires something different for each puzzle such as angling lasers at a fellow player to light up sensors or synchronising button pressing.

OPEN ME! will be featured at the upcoming Game Developer’s Conference in San Francisco later this month.