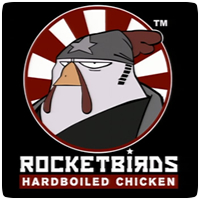 Rocketbirds: Hardboiled Chicken for PlayStation Vita arrives on the PlayStation Store next week – February 12th in North America and February 13th 2013 in Europe. The PS Vita version of the game is a port of the PS3 version, but the developers have added PS Vita controls, a harder difficulty setting and other new features.

If you already own the PS3 version of the game, unfortunately the PS Vita version won’t be available to you for free – the title isn’t cross-buy. But, you will be able to purchase it at a discounted price.

The single player game takes you through 15 chapters of full-res Penguin destruction with music video storytelling – and for the PS Vita. There is also a 10-chapter co-op campaign, so you and a friend can work together with online or ad-hoc wi-fi connection.