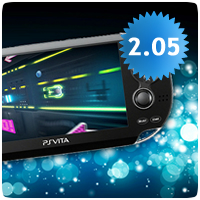 Sony has released a new firmware update for the PS Vita, updating the system software to version v2.05. The minor update is mandatory and improves system stability during the use of some features, though Sony hasn’t specified what those features are. The firmware update blocks the recent exploit related to UNO on the PSP.

You won’t be able to access the PlayStation Network without updating to the latest firmware version.