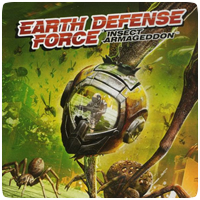 Earth Defense Force 2017 Portable invades the PS Vita in January in North America as a digital download title. The game will be available on the PlayStation Store on January 8th, 2013 for $39.99 and players will get to experience all the intense action that the Earth Defense Force can endure.

The game has been completely remastered from the original classic shooter, and with so many extras, players will truly get a new EDF experience that wasn’t possible before. Players will get to check out seven new levels plus dive into all the action with fan favorite Pale Wing, giving players the power to soar high over buildings in her jet pack and cause massive destruction from above.

You will also find some new enemies in the game, and blast them to smithereens with your choice of more than 230 weapons, including many new ones. For the first time, save the world with your friends in online multiplayer for up to four players in co-op and versus mode.