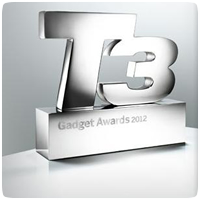 The PS Vita has scooped the Gaming Gadget of the Year award at the T3 Gadget Awards 2012 in London last night. The PS Vita won the award, beating the Nintendo 3D XL, OnLive and the Alienware X51 PC. You can see the other nominees and details about the award here.

Sony also won the TV of the Year award for the Sony Bravia KDL-55HX853.