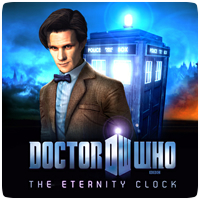 The PS3 version of Doctor Who: The Eternity Clock has been available since May 2012, but the game will finally be available on the PS Vit at this week. Thankfully, the PS Vita will have several new features that have been in development for the past few months, including the ability to use the touch screen or the dual analogue sticks to control the game.

All of the puzzle games within the game have been reworked to make full use of touchscreen controls. The “near” app will also be utilized, allowing players to collect “Gallifreyan” medals while playing through the adventure and then drop them in a GPS location for other players to collect – a bit like the Treasures in Uncharted: Golden Abyss.

The game will be available this Wednesday, October 10th 2012 on the PlayStation Store.

One comment on “Doctor Who: The Eternity Clock on PS Vita Available This Week”