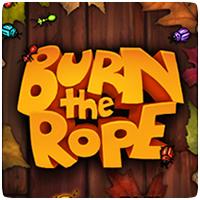 Ringzero Game Studio has revealed that mobile title Burn the Rope is coming to the PS Vita next week. Burn the Rope is an original game where you must burn as much rope as possible at each level. To start burning the rope you simply tap the touch screen wherever there is rope. Once the rope starts burning you can control the flame by rotating the screen.

The flame always burns up and it will burn out if it runs out of rope. The speed at which the flame travels along the rope is determined by the angle of the rope.