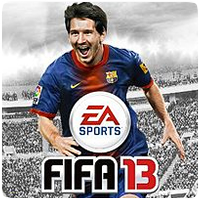 FIFA 13 is now available on the PS Vita and features 39 trophies to unlock, including the coveted Platinum trophy, 3 Gold trophies and 11 Silver ones. Unfortunately, the game isn’t scoring to well in Metacritic reviews.

A Man Down
Win a game when down one man before half-time.

All My Own Work
Win a Match with Manual Controls

Defiance
Chip the Keeper in a Head to Head Ranked match

Good Week!
Get yourself selected in the Team of the Week in Career Mode

Great Month!
Win the Manager of the Month award in Career Mode

In the Game
Create a Virtual Pro

No Draw for You!
Score a 90th minute winner in a game vs the CPU

One Goal a Season
Score a goal with a defender

Pressure is On
Score a penalty kick using a touch shot

Ruud boy
Score a goal from a volley

Thread the Needle
Make a successful through pass using the touchscreen

Top of the League?
Win an online Friends League Match

Tour Bus
Complete a match in every stadium

Trait-or
Unlock a trait for your Virtual Pro

Woodwork and In!
Score off the post or cross bar in a match

You Pointing at Me?
Make a successful direct pass using the touchscreen

Folklore
Become a Legend as a player in Career Mode

Fortress
Don’t lose any matches played at Home in a season.