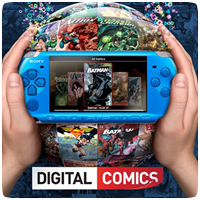 At Sony’s Press Conference at the Tokyo Games Show, earlier today, the company revealed that an all-new comic reader will be heading to the PS Vita this October in Japan. Although details are scarce, the Comic Reader app will be similar to the one released on the PSP back in December 2009.

The Comics section will return to the PlayStation Store, allowing gamers to download and read comics on their PS Vita’s. The app is expected to be updated to make use of the PS Vita’s hardware features, including the touch screen, downloading comics via 3G and the rear touch pad.

It’s unclear if the service will extend to the West, but it’s likely that something will be announced for North America and Europe too. Hopefully, previously purchased comics will be compatible on the PS Vita, should they return to the PlayStation Store.