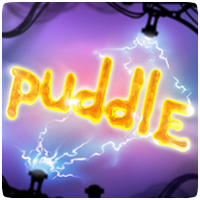 Puddle has been available in North America for just over a week now, and is finally coming to Europe today. The PS Vita game first began as a project by six students of the video game school ENJMIN. It won a Student Showcase prize at the Independent Gaming Festival at GDC 2010, and was later picked up by Neko Entertainment.

There, those same six students were able to turn it into a full-fledged game. On the PS Vita, the game makes use of the front touch-screen and rear touch-pad. Optionally, you can use the motion sensors or even the D-Pad and analogue sticks to control your puddle.

Download the full game or the demo from the PlayStation Store later today. In the mean time, check out the trophy list.