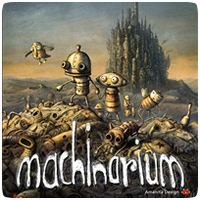 The award winning puzzle game, Machinarium, originally released on PC in 2009 has been rated by the ESRB for the PS Vita. The PS3 version of the game was announced back in march 2011 but has yet to materialise. The point and click puzzle game will be perfect the the PS Vita’s touch screen, turning it into a “touch and tap” game instead.

The goal of Machinarium is to solve a series of puzzles and brain teasers. The puzzles are linked together by an overworld consisting of a traditional “point and click” adventure story.

Machinarium is notable in that it contains no dialogue, spoken or written, apart from a few tutorial prompts on the first screen. Even the game’s walkthrough system is devoid of written or spoken dialog. Instead, it uses a series of sketches describing the puzzle at hand and its solution.