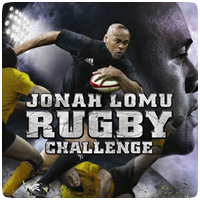 Rugby Challenge was released on the PS Vita on 27 June 2012 in Europe, UK, South Africa, Australia and New Zealand. The first game ever published for the PlayStation Vita by Tru Blu Entertainment features console quality Rugby Challenge gameplay, graphics, game modes and authenticity. The game also has 25 trophies to unlock, including a platinum one.

Team Player
Win 10 matches, each as a different team

Super, Thanks For Asking
Win the Rugby 15 Competition

There’s No Forfeiting This One
Win the Top 14 Competitio

Working On My Quads
Win the Quad Nations Competition

Thanks Team
Watch through the credits

Possessed
Maintain Over 60% possession in a matc

No School Boy Difficulty Here
Get gold medals in every tutorial

This is My House
Maintain over 60% territory in a match

That’s No Oil Painting, But OK
Create and save a custom player

Lack of Discipline
The ref calls one red card against you

Where is Tim Timber?
Win the ITM Cup Competition