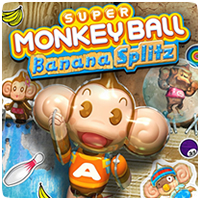 Sega has revealed that the upcoming exclusive PS Vita title, Super Monkey Ball: Banana Splitz, will be released on October 23 2012. The game features 100 levels across five worlds made of Jungle, Clay, Wood, Metal and Cardboard. The game also features both local multiplayer and online multiplayer over Wifi — a first for the series.

The game also features the popular minigames from the series, including Monkey Bowling and Monkey Target. There are eight total modes to play and compete in, all of which leverage PS Vita’s unique hardware strengths. The game make use of the PS Vita’s built-in tech for controls across the minigames and main game modes. You can use full tilt control to navigate the entire game or opt to play with the analog sticks – it’s entirely up to you.

The level generator uses the PS Vita’s camera so you can take a photo of anything in real life, and then craft a level from the photo. The game is available to pre-order on Amazon.co.uk for £34.99. Check out the trailer for the game below and check out the trophy list for the game here.