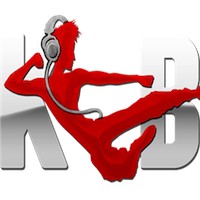 A new game for the PS Vita has been revealed. KickBeat is a music game; it just doesn’t look like one. KickBeat follows in the tradition of controller based music games, like Patapon and Frequency. Although its beat-matching mechanic is not complex and will be familiar to fans of the music game genre, KickBeat does a couple things that make it different from anything else you’ve played.

The first thing about KickBeat that is immediately visible is its fighting theme. There are no action cues like bars, arrows or button icons that other music games rely on. Instead, there is are fully animated 3D characters which you react to. You can even get rid of all the other interface parts (such as score) if you like, so that there are no distractions from the action.

As you may have gathered from the trailer, enemies circle around you before attacking from one or more of the four cardinal directions. Their attacks are synched to the song’s beat and to other high-energy moments in the music: guitars, vocals, and so on. To defeat one, you just press the button corresponding to their direction at the correct time (right as they move in to attack you). For example, when an enemy attacks from the right, you press the right direction button or the Circle button to send them sprawling. You can also just use the touch screen – tap the portion of the screen where the enemy is attacking from, and you’ll get the same result. Two or three enemies at once? No problem! Just press all the appropriate buttons/regions at once. You can use both the directional and face buttons simultaneously, an essential skill to learn once you get to the expert difficulty levels and you’re beset by a constant stream of enemies.

The game has been in development since 2009, so you can imagine the amount of work that has done into making this game. Almost 100% of the animations in the game are hand-animated, and the game features 18 tracks across multiple genres (mostly drum & bass, rock, and hip-hop), from big names like Pendulum and Rob Zombie to some stuff you probably haven’t heard before, like a track from Taiwanese rapper Shen Yi.

We also thought it would be fun to be able to put your own music into the game – that was my favourite feature in Audiosurf. We’ve got a feature that will allow you to do just that, with no scripting on your part required – just put in a couple pieces of info, customize a couple settings to your taste, and the game creates a new level for you to play.

The game will be available exclusively for the PlayStation Vita, and will be shown off at E3 next month.