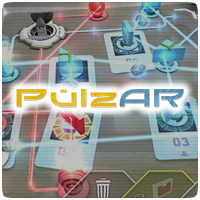 Yet another Augmented Reality game is heading to the PlayStation Vita. The new title, PulzAR, joins the AR Play line-up in June, turning any surface into a puzzle game with the use of the AR Play cards that came with your PS Vita.

In PulzAR, the Earth is in grave danger. Somewhere just beyond our planet’s outer atmosphere, a series of colossal asteroids are spinning ever closer on a deadly collision course to wipe out humankind. So far, all attempts to divert their trajectory have failed. Now, in mankind’s desperate last stand against certain catastrophe, it’s up to you to command a network of explosive rockets and try to blast the asteroids into a harmless meteor shower before they reach Earth.

Using precision laser technology, you have only a limited time to program the guidance system using a series of reflectors, splitters, and filters that activate the nodes that will launch the rockets towards their targets. Once launched, you are able to follow the rocket, looking up with your PS Vita as it reaches beyond the atmosphere and into the vastness of space with only one purpose…to destroy some serious space rock!